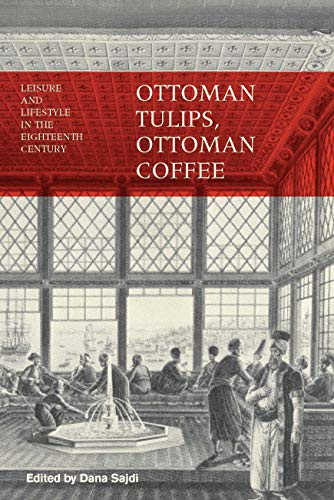 Ottoman Tulips, Ottoman Coffee: Leisure and Lifestyle in the Eighteenth Century is recommended to people who are interested in Ottoman cultural history. Defying outdated assumptions or misconceptions about the Ottoman culture, the book revises them from coffeehouses to the first printing press in a revisionist fashion. Its intended audience is experts who have prior knowledge about these topics. Its uniqueness lies in being a pioneering work.

Ottoman Tulips, Ottoman Coffee: Leisure and Lifestyle in the Eighteenth Century is a collection of articles regarding Ottoman cultural history presented at a conference at Princeton University in 2005. As the title suggests, the book claims to revisit a wide range of cultural concepts from coffeehouses to ceremonies within the Ottoman Empire in the 18th century in six chapters by six authors.

Dana Sajdi from Boston College addresses the relationship between cultural history and the Ottoman decline thesis; Can Erimtan expresses interregional architectural encounters at Sa'dabad Pavillion in Istanbul in the context of the Ottoman-Safavid competition rather than Western interaction. Babak Rahimi from UC San Diego highlights ceremonial transformations of circumcision processions, and Orlin Sabev from the Bulgarian Academy of Sciences conceptualizes financial acquisitions of the initial Ottoman printing press. Ali Çaksu from YTU explains the socio-cultural functions of coffeehouses for janissaries, and Alan Mikhail from Yale identifies the sexual boundaries of coffeehouses.

The argument of this book is to display the undeniable prominence of cultural institutions and products in shaping the socio-political history of the Early Modern Ottoman Empire. As its editor, Sajdi clarifies:

This volume is one of the first collective treatments to focus on culture and thus seeks to add culture to the study of Ottoman early modernity. (2)

The contribution of cultural history would revise and even reverse our understanding of many debatable issues like the advent of the printing press. All authors underline that cultural history is indispensable for grasping the 18th-century Ottoman world that is often a neglected terrain in scholarly studies. Challenging acknowledged assumptions of traditional historiography, the volume treats culture as a crucial category to reevaluate the Early Modern Ottoman world.

The authors of this book challenge the assumptions of traditional historiography by approaching controversial subjects from a revisionist standpoint.

One of the most powerful aspects of this revisionist volume is employing new sources from probate inventories to recently discovered archival documents to identify crucial points without neglecting a genealogical approach to explain the previous scholarship. Sabev and Çaksu put forward convincing arguments by implementing undiscovered sources into their topics, strengthening the credibility of their works.

The lack of a holistic chronological narrative and geographic scale in the volume might be its few weaknesses. Initially, neglecting other cultural developments of the 18th century and taking just the Tulip Period (Lâle Devri) (1718-30) into consideration is a considerable deficiency. Covering all cultural developments is impossible in a few chapters, but at least adding one article about one of them would chronologically make the account more comprehensive. Besides, this collection has a geographically restricted narrative based on Istanbul except for Mikhail's use of Cairo and Aleppo. The volume would remove this problem by tracing these encounters within other major urban or rural centers.

Overall, this book is a valuable collection as a pioneering contribution for Ottoman studies to assess its cultural history. Its authors adroitly challenge the assumptions of traditional historiography by approaching controversial subjects from a revisionist standpoint. Its intended audience includes academics of the 18th-century Ottoman world, Ottoman cultural historians, and students who wonder about these topics. The chapters require knowledge of several historical and historiographical developments, like the first printing press or the emergence of the decline thesis. In my view, the volume is a tour de force in terms of revisiting contentious issues, covering prominent topics, and laying out understudied themes by comprehending the lifestyle and leisure activities of Ottoman society chiefly in Istanbul during the Tulip Period.

$26.95
plus shipping
By purchasing books through this website, you support our non-profit organization. World History Encyclopedia receives a small commission for each book sold through our affiliate partners.

The first plantations in the Americas of sugar cane, cocoa, tobacco...
Article

Spanning across three continents and holding dominance over the...

$26.95
plus shipping
By purchasing books through this website, you support our non-profit organization. World History Encyclopedia receives a small commission for each book sold through our affiliate partners.